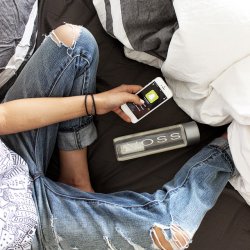 Næste indlæg
Vlogging? Yes, It's Happening, Guys. I know, I know: it took me literally ages. A-G-E-S! To f

#FINDYOURCOLOUR Even When Everything’s Kinda Black and White

At the age of 15 I?d spent hours daydreaming about the future, imagining where I?d be in my 20s. I had this picture of myself, the A-list fashion editor, flicking through the first drafts early in the morning, thoroughly examining each piece. I lived in London and were yet to meet the man of my dreams and ?cook up? a badass career.

Aw, and socialise, of course, every s-i-n-g-l-e night.
Fashion events, work dinners, cocktail parties and all of that meant for networking rather than fun. And giving birth was never an option. The solution? Adoption.

A few weeks before turning 25, 20 freakin? 5, sadly I?m not that different to the girl I was back
in the day. I’d quite often doze off into a daydream and try to make sense to what is really quite an uncertain future. According to plan, I should?ve changed a lot by now, shouldn?t I? I should?ve grown immune to feelings & emotions – a stern fashion editor I should?ve become. Only that I haven?t. And here I am. Still a hopeless optimist, a wanderer (and a vegetarian!), who ain?t no clue which journey to embark on. Those days, I?d cycle into the City in hopes of finding an
alternative way to satisfy my hunger for social contact. I?d ditch my bike and stand right in the middle of Strøget. Then, I?d dedicate quite some time watching the strangers rushing to known directions, all hyped up to conquer the day. I?d be memorising the vibrant sounds of the city to later on use as a bedtime song. I?d pay attention to the bubbly laughter of the ?gens? and try to match it with the personality of someone from back home. And every single day one and the same instance would occur. My vision would suddenly get blurred and all colours would disappear at once. And
then like the modern Jackson Pollock, I?d see myself splattering the City Canvas with tons of monochrome paint.
And if you think that my move to Copenhagen had completely messed with my head? well.
No. Rather, it?s the act of ?starting over? that uttered in disgust: ?Do you see… that!? Yep, that! The
discrepancy between the ‘perfect’ story narrated by your dreams and the ‘messy’ one narrated by your life at present? And while focusing way too much on what I should?ve already
achieved, I?ve somehow ended up allowing myself to yet again feel utterly sad, lost, and confused.

And weirdly, it was a vivid dream I had that snapped me back to reality. My friends and I were all together on a boat somewhere in the ocean. We were feeding our bodies with each other?s laughter and revitalising our souls with the sweet sounds coming from the speakers.
And then it hit me. If it weren?t for the weird twists and turns my life has made, most of the people wouldn?t have joined me on that boat. Actually, when I think about it, we wouldn?t have known each other at all.
The moment I opened my eyes my lips were curved in a smile. My hands were no longer covered in black and white. And the surrounding me space? Well, it was dyed in colour again with a bouquet of blissful memories thriving again in my head.

I was like ?**** no! No monochrome for me today?. I went for a mint green top and thought it was time for another walk. And in contrast to the standard Danish gloomy weather, I was now all back and ready to spread out happiness and love.
And I suggest you join me for a cheeky game.
Close your eyes.
Think of all the people who love you and are always
there for you.
Remind yourself of a moment that have made your heart jump
with joy.
Now ? relive the emotion that it triggered. Come on. RE-LIVE it & let yourself feel it with every fibre of  your being.
Now dye it in a single colour.
Your colour.
The one that will remind you that you?re
capable of experiencing happiness
no less than anyone else.
That happiness is deep within you and all you need to do is OWN IT? Like A Boss.
And being the owner of your ‘happiness’ is GRANDER than being an owner of anything else. Yep, I might be quite similar to that 15 year-old girl, but now I know a secret that back than I was completely oblivious about. So, excuse me, Ego, but yep, I have actually achieved quite a lot.

And now – Let?s start something grander.

Let?s grant with a smile those who currently see no light.
Let?s agree that it?s okay to sometimes not be okay.
But let?s also agree ? that ?being? means ?existing? ? and ?existing? is kind of passive.

?Living & cooking up experiences?, however, isn’t.

And when you think about it: we have only one ?lifespan? to craft? Don’t let it go to waste.
Rather, I suggest we make it COUNT.

#FindYourColour and invite a friend to do that too.

Let?s infect some happiness, shall we?
Love,
A. 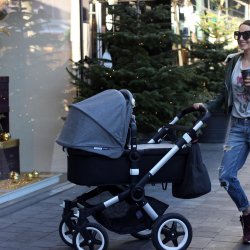 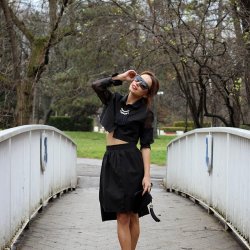 THIS SEASON’S MUST HAVE: THE TWO PIECE LITTLE BLACK SET & AN EXCLUSIVE INTERVIEW WITH THE INSPIRING DESIGNER NIKOLETT... 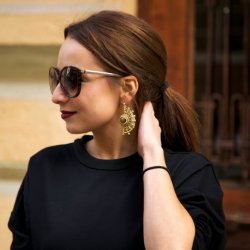 BLACK ON BLACK OUTFIT AND STATEMENT EARRINGS TO JAZZ IT ALL UP... 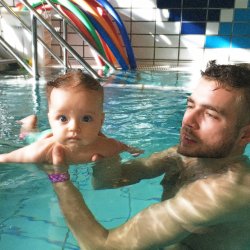 We Go Baby Swimming and Partying, I mean kinda…... 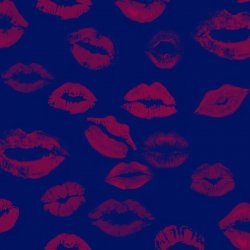 Who said that Blue cannot become the Colour of Love?... 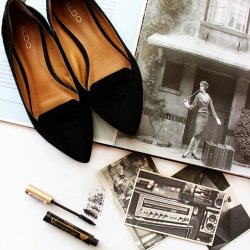 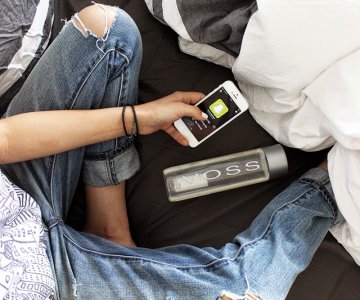 Vlogging? Yes, It's Happening, Guys. I know, I know: it took me literally ages. A-G-E-S! To finally gather up the courage to let you hear my …
Læs mere